Share a memory
Obituary & Services
Tribute Wall
Read more about the life story of Louis and share your memory.

Lou Fritz loved life, he loved his family and his friends most of all. But his heart was big enough to love more. He loved cars. He loved all things to do with them from fixing them up, to buying and selling them, to watching people race them, to collecting antique ones, to judging them and to touring around the country in them, his biggest passion after his family was most certainly cars. He was the “answer man” when anyone had a car making a funny noise, he was happy to listen.

Lou was fortunate to find the love of his life at a young age, he married Mary Jane in 1958. They were blessed with two wonderful children, Joyce and her brother, the late Louis Edward Fritz, Jr. better known as Le.  Lou’s interest in model trains from his childhood continued as a hobby with his children. He designed and built a permanent train layout for their basement that was enjoyed by so many throughout the years.

Lou was an entrepreneur from an early age, starting his first business, a snowball stand at age 12, which he sold to the neighbor down the street. Next, he motorized his wagon so that he could create a mobile snowball business. He road it down to the local gas station to sell to the employees on hot summer days. He hung around the gas station so often the owner offered him a job. After gaining enough knowledge, he opened his own business, Pikesville Auto and Body Repair, Inc. at just 20 years old. He spent the next few decades growing the business.

When he wasn’t working on the business he was pursuing his hobby….cars, this time, antique cars. He enjoyed restoring them and showing them at local and regional car shows. Eventually his car friends convinced him to join the car club, the Antique Automobile Club of America. He became a show judge and was eventually appointed to the National Awards committee. Over the years he accrued 359 judging credits traveling with his wife to shows around the country. They went on almost 200 antique car tours. On one particular tour, the Founders’ Tour, they took the same car for 32 consecutive years.

Lou was born in Pikesville, MD to the late Henry Theodore Fritz, Sr. and Hilda F. Fritz. He was loved by his family and was the proud younger brother to Ted, and Uncle to Kathy, Terry and Kim Fritz and Great Uncle to Justin and his son Zephyr and Lauren and her daughter Theo.

He continued to be active in business, never totally retiring, directing his interest to real estate.

He was a member of the Ionic Masons, the Boumi Temple Shriners, and the Scottish Rite.

In lieu of flowers donations can be made to Antique Automobile Club of America: 800 West Hershey Park Drive, Hershey, PA 17033.

A Celebration of Life is being planned for a future date.

To send flowers to the family or plant a tree in memory of Louis E. Fritz, Sr., please visit our floral store. 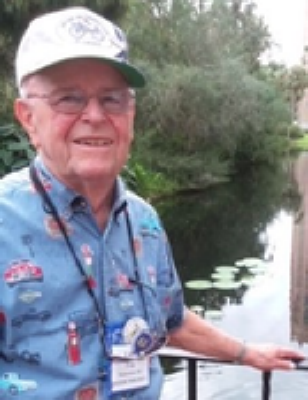 You can still show your support by sending flowers directly to the family, or by planting a memorial tree in the memory of Louis E. Fritz, Sr.